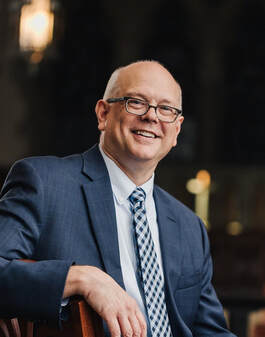 Conductor, composer, and pianist, Tim Harbold is a Professor of Music and Choral Director at Wheaton College in Norton, MA, where he conducts the Wheaton Chorale and Chamber Singers in repertoire ranging from classical masterworks to world folk songs, spirituals, and jazz.  Under his direction, Wheaton's choirs have enjoyed coachings from leading vocal groups such as the King’s Singers, Roomful of Teeth, Rockapella, Take 6 and Skylark Vocal Ensemble, and have collaborated with visiting artist specialists to explore music traditions spanning the globe.  Harbold also directs the Gospel Choir at the historic Old South Church in Boston, collaborating with soloists Sayida Rivers Farmer and Jordan Pettis and the Willie Sordillo jazz trio. The ensemble has twice performed at Martin Luther King celebrations attended by the Boston Mayor, the Massachusetts Governor and U.S. Senators, and other dignitaries. Tim's previous choirs include the Oure Pleasure Singers and the Concert, Chamber and Gospel Choirs at UMass Dartmouth.  Harbold’s compositions and arrangements have been published by Santa Barbara Music Publishing, E.C. Schirmer, and Hinshaw Music, recorded by Ensemble Altera, and performed by groups ranging from All-State and professional choirs to school, church, and community choruses.   As a pianist, Mr. Harbold specializes in American song, and has performed frequently with vocalist Valerie Anastasio. The duo have paired with Benjamin Sears and Bradford Conner to create several popular shows that have toured New England and New York. Their CD tribute to Noel Coward and Cole Porter, Noel & Cole: Together With Music, was lauded by Billboard for its charming, enthusiastic pairing of songwriting greats. Their second show, Fred & Ethel: Great Songs of Astaire and Merman, was selected by Bay Windows as one of the year's Top 10 cabaret event and nominated for an IRNE award for Best Cabaret by the Independent Reviewers of New England. Mr. Harbold studied music at Williams College, and conducting at New England Conservatory, where he was a student of Tamara Brooks and an Assistant to Lorna Cooke DeVaron.
​